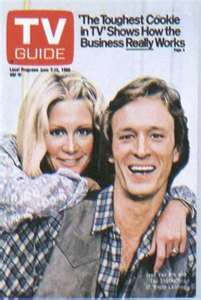 Poor Val and Gary Ewing, refugees from rapacious Dallas and the series of the same name. Now they live in Knots Landing, a small, exclusive Southern California beach town, and they can’t adjust to life on the West Coast.
Val looks like Joan Kennedy but dresses like Daisy Mae. In her early 30s, she wears hair ribbons, flat shoes and ruffled sundresses she must order from the Prepubescent Miss department of some Dallas store. How can she possibly fit in, in Southern California, without natural cottons from a chic boutique, a $40 haircut and porcelain fingernails?

As for her husband Gary, he still wears his cowboy boots. Luckily, these are trendy just now among people who’ve never seen a cow; but someone should tell Gary to stop sleeping in that Stanley Kowalski undershirt before he hears from the Knots Landing improvement association. In the inflated California real-estate market, those big houses in the Ewings’ cul-de-sac, ticky-tacky though they are, must go for half a mil. And out here, communities that well-heeled generally have rules. I know of at least one in which cats must be kept on leashes.

We’re big on role models out here, too, so Val might as well choose her neighbor Karen Fairgate. Karen is nice, mind you; intelligent and likable. Still, one can tell at a glance that she has her designer jeans, drycleaned to keep their shape and that her eyelashes began life as part of a mink. Karen also has regulation Southern California fingernails, those inch-long, dark-red, “sculptured” claws that look as if they belong on a lobster. We’re told she still manages to be a marvelous cook, in her gourmet kitchen with its requisite butcher blocks and baker’s reck, but I don’t believe it. Sculptured nails, like Chinese bound feet, render a woman fashionably helpless. “Type?” wailed a secretary in a Los Angeles TV production company to me. “I can’t. I just spent $60 on a brand-new set of nails.” Surely no one would subject such an investment to the hazards of a garlic press or a chesse grater.

Two other Knots Landing neighbors have just the right look. Laura is a lawyer’s wife, Ginger a schoolteacher married to a record producer. Both are thin, pretty and glowing with health. You know they’re on the Scarsdale Diet and never miss a workout at the local branch of Jane Fonda’s gym. Despite half-hearted efforts to suggest the Knots Landing gang are just folks, these are people with a least superficial sophistication. When they go to dinner at a fancy French restaurant, for example, they all know their way around the menu, debating between bouillabaisse, escargots and caviar. (I should add that all this urbanity was undercut when Richard ordered the wine. What he asked for came out “Shadow LaFeet.”) Yet Knots Landing is a cul-de-sac in more ways than one.

“Karen, do you know it’s 10 o’clock?” Sid Fairgate demanded in one episode, when his wife came home from a high-school PTA meeting. I dropped my popcorn. This is California husband to a California wife? Karen protested mildly but, in what I thought a marked departure from reality, did not tell Sid where he could put his wristwatch. As throwbacks go in Knots Landing, though, Laura and Richard are even more unlikely. When Richard complains about his breakfast eggs, Laura cowers and offers to make more. She also apologizes abjectly for having sent his shirts to the laundry. What should she have done–beaten them clean, with rocks, in a cold stream? Richard is fiercely ambitious professionally, a ’70s replay of the ’50s organization man. Dutiful Laura even goes to bed with an old boy friend to advance her husband’s chances, but go-getters aren’t regarded as properly mellow in Richard’s part of the world, and he is hopelessly out of touch with the pervading style. What other Southern California lawyer wears gray suits, white shirts and ties?

Because I live in Northern California, one must allow for regional differences. I still think Richard should know that my most successful lawyer friends, dress like very clean, very rich lumberjacks. Sometimes, happily, Knots Landing manages to blast out of its time warp and take on a contemporary California feel. One such episode hinged around the effort to save the town’s beach from offshore oil drilling. In a new and timely version of the Western, Texas oilmen were the villains and the ecologists the good guys in the white hats. True, the save-the-beach contingent brought the oilmen to their knees with remarkably little effort–about as much as it would take to recycle the bottles from a case of rare old Shadow LaFeet. They’re to be commended none-theless. As the governor of California likes to point out, we’re all fellow passengers on “Spacehip Earth,” although some of us are traveling coach while the Knots Landing types travel first-class.

Another up-to-the-minute segment dealt with rape. The four husbands of the series, even Richard the jerk, reacted to the event sensitively. No macho chest-beating, no vigilante attempts, no flicker of suggestion that the wife involved might somehow be to blame. Since husbands in TV rape dramas are often depicted as unfeeling louts, it pleased me to see this treatment avoid such stereotyping. Small details, too, often ring true if one knows the turf. When Laura orders a drink in a bar, it’s a white-wine spritzer–the fashionable California drink. (Order a Scotch-and-soda, and the bartender will peer through the overhanging ferns and ask you how to mix it.) A high-school teacher not only has the blond good looks of an overgrown surfer, he wears his shirts fashionably unbuttoned almost to the navel. You know he not only doesn’t sleep in his underwear, he doesn’t own any. Even Val and Gary’s kitchen sports golden-oak furniture and a Tiffany lamp, sure signs they’re assimilating. So maybe they’ll like it here after all. They’ll settle into their new, biodegradable soap opera, get themselves suntans and trade their Texas-style gas eater for a tiny compact.

Frankly, I’m glad they’re not my neighbors, though. That Val Ewing has problems. Spectacularly miscast as a country-music singer, Julie Harris did a guest shot on Knots Landing as Val ‘s monster of a mother. Harris played a stone-hearted woman who trompled her nice husband and her tender young daughter in her mad pursuit of fame. “You would have been proud of me if I’d made it big,” Harris screamed, in the obligatory mother-daughter confrontation scene. “No!” Val screamed back at her. “All I wanted was a momma!” This episode set both country music and career mothers back a hundred years. But never mind. What worries me is that it ended with Val crooning tenderly to her childhood rag doll. God knows I’m usually the last to recommend such things, but maybe Val would benefit from some of the new California therapies–primal screaming, or est, or meditative massage. Or maybe she could just bundle her doll and her Dogpatch sundresses off to Goodwill and try writing a thousand times “I AM A GROWN-UP.”