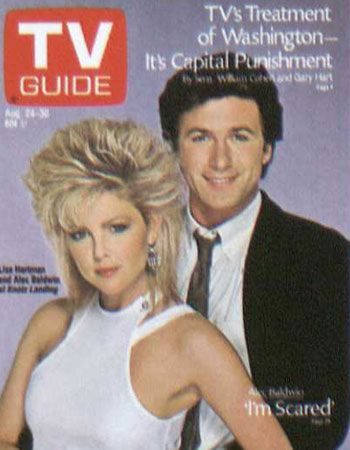 There’s some evidence that the Fates like to play sly little tricks on humans they have otherwise grandly favored. Like the guy who’s so incredibly handsome, except for those ears, or the golden girl whos knees go knock-knock, or the sandlot phenom who would zoom straight to the Hall of Fame if he could only hit the sinker. Those same imps seem to have had some of their special fun with Alec Baldwin, who plays Joshua Rush, the manipulative TV evangelist on CBS’s prime-time soap opera Knots Landing. Baldwin appears to have it all. He’s only 27, with strong, pleasant good looks and so sexy girls just naturally run up and hug him. Crusty producers smile on him and casting directors fondly remember every little thing he’s done. He has, by his own admission, “a lucky star.” So? “I’m scared. I’ve always been scared, more than I’ve ever dared to admit. I’ve never been any place in my life where I expected to be asked back.” His first continuing role was in the daytime soap The Doctors, and “I was petrified every minute.” When Knots came along, “I was never so nervous in my life.” The role of Joshua would seem to be the kind to put any actor’s fears to rest-a handsome conniver who uses people in ways the great J.R. Ewing himself would admire. Characters like Joshua are almost as important to the nighttime soaps as Lust itself, and they usually go on and on right into residual heaven. But Baldwin is sure he will be the exception. “Joshua has become such a bad guy,” Baldwin reflects, “I don’t know how much longer he’ll be on the show. There’s this green foam…a smell that I’m smelling …I think it’s death.” David Jacobs, creator and co-executive producer of Knots, will only say, “We know he’s going to be back next season. And when he started, he only wanted to do it for a year.”

Donna Mills, who plays Abby Cunningham Ewing, thinks this time Baldwin’s ever-present fears may have some basis. “They could have developed Joshua’s storyline better. The character seemed to change and turn bad and a part is hard to play when it isn’t written clear and strong. And if the character isn’t that interesting, he might be better off not playing it. Though I know Alec loves the show and wants to stay with it.” Not that he needs work. On the day he was discussing Joshua’s dubious future, word came that he had won a starring role with Stephanie Zimbalist in NBC’s TV-movie, “Love on the Run,” inspired by the true story of a criminal lawyer in love with her runaway client. It was a pleasant surprise, but his life seems full of pleasant surprises. “I’m always waiting for my agent to tell me, ‘OK, it’s over now, it’s time for you to get on with your life’.” Meaning into law school and a career in public service, which was his goal from the beginning. “It always seemed being a lawyer, perhaps going into politics, that was something real. Every time I got an acting job I saw it as a chance to put away my money for law school.” But with his Hollywood credits and producers and agents telling him it’s only the beginning, he’s finally decided maybe he was meant to be an actor. He’s even resigned to life in Hollywood, which once struck him as the place to which New Yorkers were banished for their sins. “I came West believing Southern California was only beaches and tennis, beautiful women and houses in canyons. No culture. Nothing for the mind. I hated it all. But I began to notice beaches and tennis and beautiful women have their attractions-I almost married one of the women-and now I’m shopping for a house in a canyon.” He is the second of seven children. His father was an Amityville, N.Y., school teacher: “A Spencer Tracy down-to-earth guy who had to hold two, three, four jobs just to come up with enough scratch to keep us together.” At New York University he took courses in drama, and he also studied at the Lee Strasberg Theatre Institute. Before long, he was auditioning for this and that and winning the role of Billy Aldrich on The Doctors. “The show was always in trouble and all of us were afraid we were responsible, me most of all. “People were always asking how I got The Doctors and who was my agent. I didn’t have an agent; I just walked into an open audition.” Soon he not only had an agent but important friends at CBS. Margie Glucksman-Clark and Jean Guest, director and vice-president, respectively, of talent and casting, had Baldwin read for them and, in Guest’s words, “We were crazy about him. He has a face that you like to spend an hour with.”

After Doctors, Baldwin was encouraged, or maybe the word is pushed, by his agent, to dare Hollywood. With the help of his important friends, he immediately landed a lead in the Cutter to Houston series. When the show flopped, Baldwin was sure the time had come to put all this acting stuff behind him and head for law school , but CBS had other plans. “We made a deal with him,” Guest reports, “and told him to think for a minute about giving up acting.” Baldwin admits, “As far as my career is concerned, it’s been ice cream every day. I was always handed jobs not because of what I had done but because of the potential people thought they saw in me. None of them never knew how scared I was inside.” Good friends Glucksman-Clark and Guest now arranged for Baldwin to read for a new character on Knots. Producer Jacobs met him and pronounced him, “A nice guy. A little shy.” Lisa Hartman, who plays Cathy , now married to Joshua, won’t soon forget their first meeting. “I came to the reading and when I saw this guy in the lobby, I thought, ‘Boy, he’s good looking. I hope he’s the one.’ It went fine and afterward he walked me to my car and I kept watching him in the rear-view mirror as I drove away. Well, I rear-ended another car and there were these people jumping up and down and screaming at me and I was still watching Alec in the mirror.” Baldwin and Hartman made a handsome couple for their splashy Knots wedding, though he found the event a bit humbling. As they were preparing for the fan photos, he asked for a touch up to his hair and was told, “Why bother? No one will be looking at you.” As the wedding was being filmed, a stagehand turned to a buddy, and announced solemnly, “It won’t last.” Hartman admits she likes Baldwin a lot more than Joshua. “Before Joshua came along, my character was stronger, but he’s weakened it.” Of Baldwin, “The chemistry between us is great. Of course we aren’t together that much. You hear about how hard actors work. Don’t believe it. The two of us put in one full day last week. Sometimes it’s only a couple of half days a week. The 12 people on this show actually see very little of each other. If all 12 worked every day we’d kill each other.” Baldwin is aware of the hazards playing a scoundrelly TV evangelist. “One day a strange woman came to me backstage, very sad and angry, and said, ‘Watch out what you do with your character because you are going to offend a lot of people’.” He has diligently studied TV evangelists, a field somewhat new to him. “I’m a Catholic. A periodic Catholic.” He was awed by the tapes of Jimmy Swaggart. “I couldn’t believe the sway he holds over people, the millions of dollars he brings in.” He found Jerry Falwell “the most political. He’s nothing if not political.” Baldwin had pressed Jacobs to make Joshua “more political, more Falwellesque,” and Jacobs says the character will become somewhat more political, “but I see Joshua as a combination of a TV evangelist and Howard Beale,” the doomsayer of the movie “Network.” Meanwhile Baldwin faces such decisions as which new sports car to buy (“I think I’ll go for an Italian”) and whether to marry any of the young women he encounters. There is a problem. “Everyone I want to marry is already taken- Barbara Mandrell, Sissy Spacek, Chris Evert Lloyd.” He wants his woman to have it made. “I’d rather be supportive of someone who’s successful than someone who isn’t. I want a woman who has her own trip going. Chris would be the perfect wife. She seems a sweet lady and she’s a big success and she could pulverize me in tennis. Ah, but she’s taken.” He was almost married a year ago “to a lady whose name I won’t reveal. Sometimes I wish I had married her.” One obstacle may have been nagging memories of a childhood where money was short. “My father, who died two years ago, was the greatest man I ever knew. He did everything in the world for his children and never a thing for himself.” He recognizes his circumstances are different. “Yes, I’d like to get married and have kids because I think they would have a pretty good life. We could travel. I’d spend time with them and not just buy them out. Someday it will happen.” And judging by his past, the Fates will surely deal him a gorgeous lady. And she won’t know that inside, he’ll be scared to death.