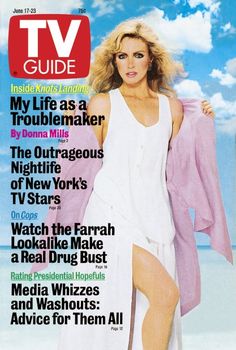 I decided to leave Knots Landing for reasons that seem right to an actress: I had been playing Abby for nine seasons on CBS, and I had reached a point where I needed new roles and new challenges. I could have played her forever but it was just time to let her go and say good bye.

It may surprise viewers who see Abby as an immoral schemer, but I like her. Her main purpose on the show, of course, was to stir up trouble. This season alone, she defrauded her partners of their land holdings, framed her future son-in-law by planting cocaine in his locker, and had someone doctor Paiges expense account so that it appeared she was stealing from the company. Still, she was always three-dimensional. She wasnt just mean. She never hurt anybody just for the sake of hurting them. When the writers wanted me to steal Vals babies, I went in and protested violently. Abby would not have done that

She also had a lot of real strength, which women in particular like to see. Recently, a woman came up to me and said, I want you to know Abby is my inspiration. I get up in the morning, and I look in the mirror and say, Okay, youre going to be tough like Abby today. That was very gratifying for me because I tried to play her as a character with some admirable qualities. Of course, she could be devious when she wanted something and I didnt see her as a saint, but she wasnt evil.

She had some slow times, too. In the early years of the show, our stories werent serialized, so Abby didnt have a long enough range to make much trouble. And in the first six shows this year, the writers, in a change of pace, had her pretend to be a good person. I was just a ruse she was testing niceness as a tool. I didnt say anything for a while, But finally I went in and said, I cant take this anymore, Shes boring and in a slump!

But most of the time, she has been a lot of fun to play. For instance, art and Abby getting together was a very rich juicy story. Here was this couple-Gary (Ted Shackelford) and Val (Joan Van Ark)- whom the audience adored, and Abby moved into the cul-de-sac and stole him away. Then, right after marrying Gary, she started an affair with Greg Sumner (William Devane), which I thought was really delicious and outrageous stuff. So, as we went along, I tried to imbue her with a sense of humor.

In the shows early days, Abby wore budget-store clothes and worked in that dreary garage. As she made money and became a successful businesswoman, I argued that her clothes and surroundings should be more glamorous. Its always been very important to me that the costumes and the colors were right. Its a part of the way I created the mood. So I always went with the shows designer to shop for Abbys wardrobe. But sometimes there were unforeseeable problems.

For instance, what do you wear to bury a body in cement for that 1987 episode when Abby buried a body under the playground; I chose and Escada outfit with a pleated skirt. The fabric must have been stain resistant-it wouldnt get dirty! I was dragging this body around and shoveling dirt, and Id get up looking clean and fresh, with the pleats still intact!

I always felt I understood Abby, which was partly because the actors on Knots Landing had a lot to do with shaping their characters. Until a few years ago, we did a read-through of every script before we started and if something wasnt quite right, we would talk about it with the writers. Because we were involved, the characters became very important to us.

I will miss those characters. Even more. I will miss the actors who play them: I just saw Ted Shackelford the other day and realized I hadnt seen him in months because we werent involved in a storyline together. Ted an I are very close friends; we had a terrific time working together. In fact, my funniest memory of Knots Landing came from Ted. We were doing a scene together in which he was taking a shower and I was talking to him over the wall. He had a towel wrapped around him and, I assumed, shorts or something underneath. Then the camera was in me for a reaction shot, and I couldnt see him for a minute or so. When I looked back, he was mooning me. I guess he had worked it out with the cameraman and just slipped off the towel. It was so funny, couldnt continue. Now, its kind of sad no knowing if Ill ever work with Ted or the others again.

But, being entirely honest Im looking forward to the new projects I have lined up and to having a personal life again. Knots Landing was never one of those shows that was cranked out with assembly-line efficiency. I look back on it and think, Did I really get up all the time at 5 oclock in the morning Did I really work 16 hour days I love ballet, and I remember having tickets five nights in a row and not being able to make the first four performances. On the last night, we were shooting late again, and I was close to tears, This time, one of our producers, Larry Kasha, felt sorry for me, and he hired a limo with a kamikaze driver. He picked me up in the set-which was out on a a ranch in the north end of the San Fernando Valley-and somehow got me to downtown L.A. in 20 terrifying minutes.

But, for all its problems, Knots Landing is safe and familiar, while the future promises to be exciting and scary. For so long, I have known exactly what I would be doing. But part of the excitement lies in the unknown. I need some uncertainty in my life. It causes creativity.

Tales of Donna: As Her Colleagues See Her
Donna Mills isnt the kind of actress her colleagues joke about. Were serious people, says co-star Tonya Crowe, who has played Mills daughter, Olivia, for nine seasons. We dont fool around. But Crowe has recently developed a mentor relationship with her on screen mother I just turned 18, and Im more involved in my own career now. My mother doesnt handle it for me. She turns to Mills, who is known as an excellent businesswoman. for advice on things like contracts, publicity, clothes and makeup She knows how to deal with any situation in a professional and ladylike manner.

Still through the layers of respect, come occasional glimpses of a complex personality underneath. Joan Van Ark who plays Valene, remembers the moment- in the early years of the show-when Mills fixed on playing Abby as a vixen. We had just had one of those luncheon read-throughs of the script There was a very heated and emotional discussion. Sparks were flying. Then we all flounced back to resume filming. She ad I headed for the makeup mirror, and while she was adjusting that famous eye makeup and hair she announced, The last thing this show needs is another sympathetic woman Since I played on of those noble wives, I thought, How dare she! But it came to pass that she was 150 percent right.

Van Ark continues. Ive known Donna through three different cars When she joined the show, she was driving a cherry red Mistang. We all had our 450SL Mercedes and thought it was kind of small town, a high-school cheerleader car, but she liked it. Since then she has had the stars classic dark green Jaguar and what we call the diva car-the beige Jaguar. But, you know, all of them express a part of her personality.

And writer-Producer Bernard Lechowick has a memory of Mills that shows her red-Mustang side. She had a party this year, and, of course, all the bigwigs were there-people like Dynastys Joan Collins and CBS entertainment chief Kim LeMasters and Knots co-stars Bill Devane, and Joan Van Ark. But she also invited crew members and her dialogue coach. and her landscape hardener and people who once had small parts on the show. She did it quite ingenuously.