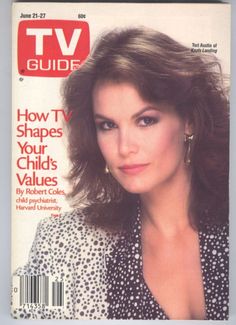 The season’s final episodes of nighttime soaps have become scary affairs, with bombings, crashes, assassinations and assorted other mayhem, but according to Teri Austin, who plays Jill Bennett on CBS’s Knots Landing, all these fictional convulsions are so much pat-a-cake compared to what’s really happening.

Which is that every actor on the shows who isn’t totally secure and at contractual peace with the producers had to sweat out every page of the final script-not to mention the rewrites that keep churning out of the production offices on the hour-to see if his character had a chance of living to scheme and lust for another season, or if he succumbs to death or any number of fates that are worse than.

In Austin’s case, she didn’t discover Jill’s future until the literal last moment. “Oh, others told me I had a good chance, but let’s face it, there are a lot of regulars on Knots and I know I’m nobody.” The screws tightened when Jill didn’t appear in the next to last episode. “A friend told me there’s probably a line in the script where Gary says, ‘Oh, my God, isn’t it too bad about Jill being hit by that bus’.” Then the script for the season’s final episode, the cliffhanger, arrived. Still no Jill.

“I sort of took things into my own hands. I called in and said somebody from TV GUIDE wanted to visit the set and watch me at work.” A couple of days went by and then “a messenger came with two pages. Two wonderful pages.” The producers said they decided to write in a scene with Jill and Gary “because they didn’t want the viewers to forget the relationship. I was, what’s the word, ecstatic.” Along with those precious two pages came a contract renewal.

Jill’s story was probably the least of the cliffhangers on Knots because four of the principals hadn’t signed new contracts. The character played by Michele Lee, one of the four, was kidnapped at season’s end and everyone knows the terrible things that happen to kidnapped women who don’t sign new contracts. (Lee will be back. She signed a new contract after the kidnapping scene was shot.) Ted Shackelford(Gary Ewing), who has a new four-year pact, points out: “When the show started there were just four principals. Then eight. Now there are 12.” Which would seem to indicate some people could be spared. Kevin Dobson(Mack) gleefully recalls that one year the cliffhanger script was titled “Negotiations.”

If Austin had been dropped, it would have been a blow to the entire cast because they’d miss the fun of ragging her daily about her Canadian accent, an accent she insists is all in their minds. Says Austin, “The one thing I made sure of before coming to Hollywood was that I got rid of my Canadian accent. I had very little to start with and now it’s all gone.”

When this is related to Shackelford, he laughs and laughs. But Austin is defiant. “On the show there are New York and Alabama accents, and every other kind, and nobody pays any attention. But if I say one word they think sounds Canadian, bells ring and sirens howl.” She says Dobson once tried to console her “and he told me,” -here she does Dobson’s unmistakable New York accent-“‘It took me a long time to lose my accent’.” David Jacobs, executive producer of Knots, sums it up gently. “Teri has a Canadian accent, but she is working on it.”

Austin’s career began in her native Toronto, where she did a TV talk show, stage work, improvisation and “radio drama-something most actors here never heard of.” She studied theater at York University where “a lot of the work was in improv, you just stand there in sheer terror and cope or die.”

Two years ago Jacobs came to Toronto to produce a soap and hired Austin “for a show or two. She played a waitress, someone very sexy. She had a scene where she was to burst into tears and she did it very sweetly. She’s not a great actess, but she had a certain quality.”

A short time later, armed with tapes and resumes’ and piles of good notices, she decided to test the Hollywood scene. “To my surprise, I got an agent right away. It turned out I had an advantage over most newcomers because I had actually worked; I had done things on stage and TV and even radio.”
She tested for several pilots and sat through innumerable interviews. “In Canada and interview is just you and somebody behind a desk. Once at Warners there were 17 people. I asked the guy in charge, ‘Did you sell tickets?’” One day she was being tested on the Lorimar lot and decided to phone Jacobs. She was invited for coffee, and when she got back to her hotel she found a message that she had landed a guest shot on Knots.

That led to the continuing role of Jill Bennett. As Jacobs puts it, “She just happened to be the right woman in the right place. We needed someone in her 20s, not quite an ingenue.” No one, of course, is suggesting the other women on Knots are advancing in years, heaven forbid. “I wouldn’t even think of commenting on that,” says Shackelford. Of Austin, Jacobs muses, “She’s sweet. She’s a particular favorite of mine.” Austin: “In anyone’s career, there has to be someone to say, ‘I’m going to give this person a chance.’ For me, it’s been David.”

It isn’t easy for an unknown young actress to join a long-running show like Knots, populated by lords and ladies of TV. When Austin did a guest shot there, he says, “I mainly just hid in my dressing room.” She overheard whispers about there being someone exciting in the cast, but before she could make any modest disclaimers, she discovered the someone was Ava Gardner.

On being introduced to someone she regarded as a real star, Austin recalls, “I felt like saying, ‘Can I get you some coffee, can I park your car?’ “Gardner, she adds, “was very pleasant.” Here she does a wicked little imitation of Gardner puffing majestically on a cigarette.

Austin seems a merry addition to Knots. She has sexy scenes with Shackelford and asks, “Have you noticed how often the scripts call for him to take off his shirt? That’s for the 42 million women out there.” For one such scene she asks, “Gee, Ted, aren’t you putting on a little weight?” Then, “You see, he gave up smoking last fall and has been putting it on ever since.” Shackelford vigorously denies this and observes, “Of course some people have a tapeworm and can pig out all day.”
Before Shackelford talks to a reporter, she solemnly advices, “Now, Ted, you are a dear friend, but remember, you’re not funny.” She needn’t have worried. The main thing he has to say, when asked to sum her up, is, “She’s like a day at the beach.”

Austin has a home in Laurel Canyon “with a private back yard where I can sunbathe without worrying about strap marks.” Of Hollywood men, Austin, 27(according to friends; she won’t discuss her age) and single, says, “I’m having fun.” Though she’s found “the guys are very forward, a little abrupt. Like, ‘Hi, how are you, how about Thursday night?’” They also seem to live in a world bounded by show biz and cars. “I went out with a doctor. He was writing a script.”

“On one date this guy led me to his car and said something like ‘This is my new Humpty Dumpty.’ I could tell I was supposed to scream or jump up and down, but all I could think of to say ws, “It’s very nice.’ He was crushed.”

She’s not only appalled that Hollywood men like to be identified by their cars, but that plenty of women go right along. “They will describe some guy to you by saying he drives a Porsche. They don’t say whether he’s nice of handsome or ugly or out on parole. Once I asked a girl about one of these Porsche men. ‘Do you remember what he looks like? Would you recognize him without his car?’”

She has also encountered men interested in more than scripts and cars, namely, the casting couch. Yes, she’s encountered men who told her she could advance through sex, and yes, she was enraged by it, and no, she never gave in.

Austin drives what she describes as a “dollar-ninety-eight rented Datsun,” courtesy of the weak Canadian dollar.” “It was the cheapest car they had and the only one they would rent me. Someone coming from Toronto has the same status here as someone from Pago Pago.” Though her standing on Knots means “I can eat and pay the rent for quite a while,” she still treats the Hollywood dollar with respect. She not only drives the cheapie car, but at a luncheon date parks it on the street a block away, thus saving valet-parking charges.

Sometimes she and the cheapie car take a man to a neighborhood restaurant(Barney’s Beanery) that has pool tables in the back. She’s an excellent pool player, a skill about as rare as lumberjacking among Hollywood women, and she’s found the surest way to crush Hollywood males, next to yawning at their cars, is to trim them at pool. “Men simply don’t like to be beaten at pool by a woman,” she says. She stoutly denies ever throwing a game just to shore up some guy’s ego, “though I do lose now and then.”

Austin is her real name(though “my brothers say it’s too dull, I should use something with ‘Lust’ in it), and her parents, two brothers and two sisters live in Toronto. She can speak a little French and “if I’m around French speaking people for long I get very brave.”

Of the future, she says, “I’ll stay here as long as I can get work, but I wouldn’t hang around if the time came when I didn’t seem to be wanted. I was very comfortable in Toronto.” She’s thought of daring London and the stage. “Not much money but it would look great on a resume’.” Meanwhile, Hollywood looks good. And with luck, the day may never come when Gary has to announce that poor Jill has just been hit by a bus.