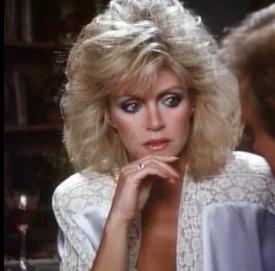 That girl is bad, mmm, mmm, B-A-D. Not someone you want to introduce your son, brother, or husband to, that’s for sure . . . you know who I’m talking about, right? KNOTS LANDING’s Abby Ewing of course.

For nigh on eight years, actress Donna Mills has provoked viewers to the point of hurling expletives at the TV screen, sneaking around as she does as the ultimate power-hungry vamp you just love to hate. Abby Ewing has cheated, blackmailed, connived, seduced, destroyed . . . and there doesn’t seem to be a way to put an end to it. Mills must love it. after all, she began her TV career as a nun. As in religious order. As in vows of obedience and chastity. As in it didn’t quite work out that way for the character.

In 1967, LOVE IS A MANY SPLENDORED THING was born. Donna played the part of Laura Donnelly, the young sister of Iris Donelly (Leslie Charleson, who now plays the fiercely independent Monica Quartermaine on GENERAL HOSPITAL and who was, in fact, Donna’s roommate for a brief time when they both decided to trek out to the West Coast.). Laura was a novitiate nun, answering to the name of Sister Cecilia. Enter one Mark Elliott, architect extraordinaire. Sister Cecilia was quite fond of Mark – as was Iris – and when it came time to say her final vows, well, she just couldn’t do it. Laura then left the order, and Mark married her. Their happiness was short-lived: Mark had a wandering eye. However, it all worked out in the end, and Laura and Mark wound up adopting a child. Fade to black.

Thus ended Mills’ tenure on Daytime. Fate had other things in store for her. She had cameo roles on the programs LANCER and DAN AUGUST, and it was her appearance on the latter that got her career wheels spinning. DAN AUGUST star Burt Reynolds ran into buddy Clint Eastwood, who was having problems casting a girl for a role in his film, ‘Play Misty for Me.’ Bury told the Pale Rider about Donna, and as donna told TV Guide, “Burt suggested Clint look at my dailies from Dan August. I was hired without ever meeting Clint.”

Following Misty, Mills told TV Guide that she went into what was called her “Victim Period.” She starred in 21 TV movies over an eight year period and claimed that “no girl on TV has ever been raped, strangled, assaulted, kidnapped, beaten, or killed more than I.” That was the breaking point – she resolved not to do another abusive flick again. When the chance to do Knots came up, she leaped at the chance.

As she told Soap Opera Digest, “I was in my agent’s office when I saw a breakdown of the character, Abby. She was described as manipulating and devious, although nice on the surface. I told my agent I wanted to do this part. I met with David Jacobs and then I said I wanted to read with Lee Rich (the head of Lorimar Productions) and CBS. The next day I had the part.”

And what a part it was. Abby came to Knots Landing as a dicorcee with two small children. She was welcomed into the ladies’ circle consisting of Karen Fairgate, Valene Ewing, and Laura Avery, all of whom felt that she must have had a rough time with her divorce, so they were extra nice to her. Within weeks, she seduced Laura’s husband, Richard, in a hot tub, and he ended up leaving town. This did not endear her to the women of Knots Landing. Then she went after weak-willed Gary Ewing, who may have been nothing next to his brother, J.R. (oh, she slept with him, too.) but he did have a whole lot of money. Mills told Soap Opera Digest that “Abby didn’t break up Gary and Val; she just happened to be there,” Fat chance.

Once Abby had Gary wrapped around her finger, she waltzed him down the aisle and began funneling his money into her own corporation. She was also putting in some time between the sheets with Greg Sumner, and even ended up fooling around with Peter Hollister, who was also having a ball with Paige Matheson and Abby’s daughter, Olivia. He ended up dead, by the way. All we can say is – is this woman evil or what?

“No,” Donna Mills stated in a 1985 interview with Soap Opera Digest. “She’ll go further than most people, but she’s not willing to do anything. She’ll hurt them emotionally but not in any other way. And she has feelings. I think evil people don’t.”

Care to shed some light on just what those feelings are? Donna told SOD, “Abby wants power. She wants it even more than money. She likes money a lot, but she likes the power of being in control. She’s very confident of her abilities and her brains. If something goes wrong, she’ll figure out a way. She’ll overcome an obstacle because she’s very clever.”

Which is also true of Mills, who told TV Guide she has to fight a constant battle to keep Abby rotten to the core. “The writers are always trying to soften her, make her good. I say keep her bad; she’s manipulative and has no conscience.”

Miss Mills, we couldn’t agree with you more.