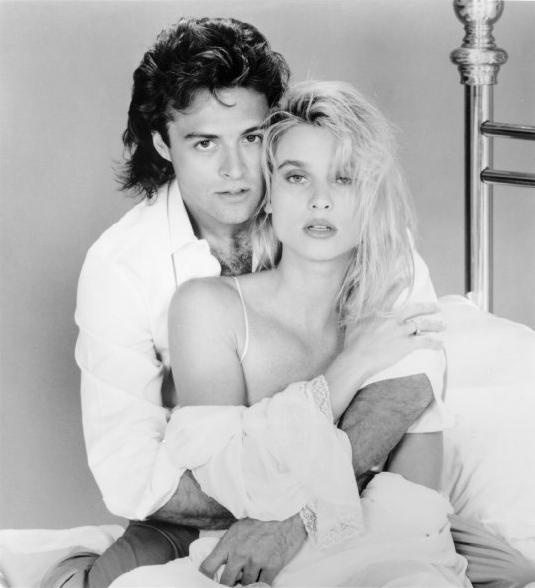 Smack in the middle of a lunch/interview with Knots Landing’s Joseph Gian, a smartly dressed fan–right out of Knots’ 18-49 female demographic group–boldly approaches the table.

“You better be back at that altar in September!” she tells Gian, better known as dubious detective Ton Ryan, the guy who ran out on Paige (Nicollette Sheridan) mere minutes before they were to be wed in last season’s suspenseful Knots Landing cliffhanger.

Gian, hiding unsuccessfully behind a trim summer beard, looks up from his lunch, smiles and politely says, “We’ll see.” What he doesn’t tell her is by that mid-June day, he didn’t have a contract for Knots’ 12th season.

“He’ll be back,” says executive producer Lawrence Kasha, contacted later in L.A. ‘We’ve had a wonderful response to Joey from all over the country. little girls write him a lot of letters, which is good for the show, and all ages like the relationship between Joe and Nicollette. it turned out to be even better than we expected.”

Last season was a heady one for Gian’s character. Ton Ryan is the cop Mack MacKenzie (Kevin Dobson) doesn’t trust–but that his daughter Paige wants to marry. Ryan also spend a good deal of time dodging the efforts of Knots’ resident heel, Greg Sumner, to run him out of town. As such, he’s getting used to being recognized in restaurants, even in Toronto. “A show like this is so powerful–it has such a large viewership,” says Gian, who’s just turned 30. “Most people knots that I’m acting, but there was this episode where I had a semi-seduction scene with Michele Phillips, just moments before I proposed to Paige. in the street, people flipped out: “Don’t you ever sleep with that monster. . .You better not touch her!”

Despite Ton’s shady past, Gian feels the fans should give him another chance. “Tom has done a lot of questionable things, but he always believed it was the right thing to do. Now he’s found that the cares for somebody, loves somebody. I like to think that he’s turned his life around since meeting Paige, but I want to see what’s going to happen with Sumner.”

Sumner–still carrying the torch for Paige–blackmailed Tom into dodging the wedding at the last minute. “Tom used his bad guy instincts to find the easy way out,” explains Kasha. “That was not the smart thing to do, and he’ll rectify that this season.” Gian sure hopes so: “A lot of women came up to me and said,’Why didn’t Tom just beat the crap out of him?’ I want to make sure that they’re handling it right. I just don’t see Tom backing down that easily.”

When it comes to the crunch of contract negotiations, the Brooklyn-raised Miami native sounds every bit as determined as his Knots alter ego. “They made me an offer that I was insulted by–I can’t repeat the words that I used,” he steams, genuinely bruised by the harsh reality of high-powered prime-time contract bargaining. “Maybe I should never have heard the first offer to begin with.”

Like a cocky rookie trying to stick with the big-league team, Gian, who spent two seasons on Hooperman, feels he’s now earned a berth among Knots’ heavy hitters. “I came on that show pretty strong,” says Gian, who compares joining such an established cast to “Walking into somebody’s house and making yourself at home right away.”

Taking notice immediately was Joan Van Ark, who met Gian in the makeup trailer. “I said, ‘Hi, my name is Joey.’ And she said, ‘ Oh yeah–you’re the little son of a bitch that’s going to keep us on our toes.’ it was the utmost compliment.” The producers also took note, and Gian, originally booked for just 10 or 12 shows, wound up doing a full season. “The relationship between Tom and Paige became real hot,” says Kasha.

Most male viewers might think playing love scenes opposite Sheridan–picked by People magazine recently as one of the most beautiful women in the world–would be payment enough. “I said a lot of nice things about her to one interviewer–that she had a European, sophisticated sexiness,” says Gian. “And then, after the interview was wrapped, they said, ‘Sounds like you really enjoy working with her.’ And I said, ‘I really do. Sometimes she’ll walk on the set, and I’ll turn around and go, wow!’ And that’s all they printed: ‘Sometimes she’ll walk on the set, and I’ll go, wow!’ ”

Gian also acknowledges that career-wise, the romance with Paige had another bonus. “It was a great opportunity, especially because I had just finished a two-season run on Hooperman, where I played Rick Silardi, a police officer who happened to be Gay.” Gian admits he had to be talked into taking that role by Hooperman’s executive producer, Steven Bochco. “Of course, I hesitated–I’m from Brooklyn,” kids Gian, who nonetheless had genuine reservations. “A lot of actors have cursed their careers, in a senceplaying a gay character.” n Gian uses Sheridan’s real-life boyfriend, L.A. Law’s Harry Hamlin–who played a gay character in the bland 1982 film “Making Love”–as an example. “It really did hurt his career for a while,” says Gian.

Gian came to Bochco’s attention after a one-day stint on L.A. Law. But his first big break came in 1985, when he became a semifinalist in the male vocalist category on the syndicated talent series Star Search. “The exposure was phenomenal,” says Gian, who went on to appear in a few music videos, including two for Diana Ross.

Gian’s next challenge is becoming a film star. But after roles in six forgettable films (“A night in Heaven,” “Mad About You”), he’s still looking for that breakthrough role. “I was up for the part of James Caan’s illegitimate son in ‘The Godfather III,’ which my friend Andy Garcia got,” says Gian, who also narrowly missed out on the new Neil Simon movie starring Alec Baldwin and Kim Basinger. “I thought I was going to nail that baby, too. Let me tell you, not getting to work for a couple of months with Kim Basinger was a big letdown.”

But Joseph, don’t you already work with Nicollette Sheridan?

“You’re right–Somebody wake me up!”