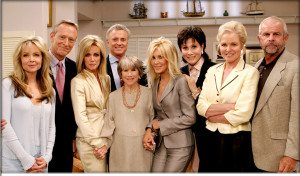 In a statement to KnotsLanding.Net Joan said:

“There are no words. My heart is broken . . . even though I knew this might be coming. “Knots” has lost an irreplaceable member of its family . . . but I will never lose the very center of my being, as an actress: the one and only Julie Harris.”

I remember the great Julie Harris, when asked what it takes to be a great actress saying, “concentration, relaxation and discipline.” RIP