Meet the Cast of Knots Landing 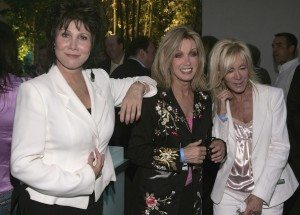 Meet the cast at the Hollywood Show!

The Hollywood Show is being held on February 13th and 14th at the Marriott Burbank Airport Hotel and Convention Center in Burbank, California.

Among those appearing are Knots Landing cast members Joan Van Ark, Ted Shackelford, Donna Mills, Michele Lee, and Kevin Dobson. We also have Larry Hagman, Morgan Fairchild, and Christopher Atkins.
There is a Q&A planned for Sunday, February 14th at 4:30PM, but it’s limited to 50 people only. 16 of the spots have already been filled, so there’s 34 that will go on a first-come, first-served basis. There is a $20 charge for the Q&A.

Reservations must be in no later than Sunday, February 7th

If there are not 50 people reserved by the end of that day, the Q&A will be canceled.

For more information about The Hollywood Show, ticket information, hotel reservations, and the rest of the guest list (there’s 77 celebs showing up at last count), visit the website at www.hollywoodshow.com.