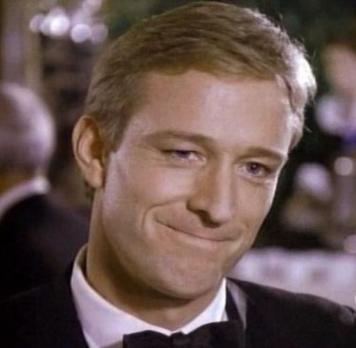 Okay, so what’s the deal? Ted Shackelford, blond, built, and talented, would seem the perfect candidate for the role of macho protector. Muscle-flexing Casanova, even. But no – our man Ted, seasoned veteran of stage and TV screen, always seems to get stuck playing . . . well, wimps, to be honest.

Fact: for one solid year, Ted played gutless lawyer Ray Gordon on Another World. Granted, it was a much desired break for the actor: prior to that point, he’d bee working as the night manager of the Carlyle Hotel in New York, and understudying for a part in the Broadway play Murder Among Friends. So a steady gig on a daytime soap was like an actor’s dream, come true. But the character! This guy took up with Alice Frame and set up a cozy little nest with her and her stepdaughter, Sally, only to have his own mother, Beatrice Gordon, steal the child because she didn’t think her very own son was a fit father. “I was a shlub,” says Shackelford in a TV Guide interview. “I played a man with a lot of conscience who had two sons the woman character would hold over him whenever he wanted anything. he’d always just have to sit there and take it. I’d keep thinking, ‘Why can’t he just throw her up against the wall?’ At least he’d be expressing himself.” The character’s lack of spine became glaringly apparent when he took over Frame Enterprises and ran it into the ground, prompting his wife to toss him aside, which left him with no other alternative than to leave Bay City.

Shackelford’s own personal life lacks such melodrama. Born in Oklahoma City, he began his acting career in Colorado, where he was attending the University of Denver. he performed in countless community and dinner theater productions, including Night of the Iguana and Bus Stop. Like so many young actors, his hunger for the theater took him to New York, where the stint on AW followed. After that, he and wife Jan headed out to the West Coast where he landed a role in the TV drama, THE DEFECTION OF SIMAS KUDIRKA with Alan Arkin.

Only thirty years old, he caught the eye of DALLAS creator David Jacobs, who thought he would be perfect for the role of Knots Landing’s Gary Ewing, a man lacking the ruthlessness of other male members of the Ewing clan, whom we all know and love so well.

Gary Ewing may not be a cutthroat, but he’s not much of his own man, wither. He bends and twists according to whichever woman he’s enticed by at the moment. Once married to the high-strung, emotional Valene, he let himself be lured away by demon rum and the charms of schemer Abby Cunningham. The Two were wed, but it quickly became apparent that all she wanted was his money. Infidelity and divorce ensued.

In a 1983 interview with Soap Opera Digest, Shackelford said, “I would like to win. I would like to play the character who gets the girls.” Gary gets the girls, but they usually get him first. This past season, he fell victim to the psychotic Jill Bennett, who was so whacked out she made Valene swallow an overdose of sleeping pills – at gunpoint. where Gary fits into all this for next season is anyone’s guess.

Ted has done extensive work in TV besides Knots Landing. He’s been seen on The Rockford Files, Soap, and Hotel. His primary interests are ecology and the environment.