How Teri Austin Got On Knots 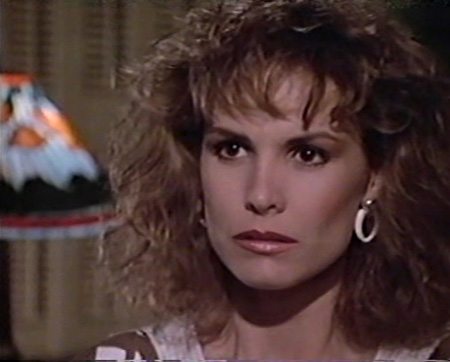 For Teri Austin, Getting the Role of Jill on ‘Knots Landing’ was a Wonderful Stroke of Luck.

I often have people asking me how they can get into show business. I always tell them they have to realize everyone’s career has a slow period and not to go Crazy when it happens. I feel qualified to give that advice because I’ve been very lucky.

I came to L.A. the end of January 1985 from Toronto, Canada because a lot of American Producer’s I met there kept telling me I should come to L.A. and after a while I realized I had to leave Toronto to further my career.

Not long after arriving, I got a role on ‘The Fall Guy’ and an NBC Pilot, ‘Champion.’ As I started my fourth month in LA, I went to a building for a meeting and saw David Jacobs’ name on the listing in the lobby and decided to use the house phone to say hello to him. We had worked together on a Lorimar production in Canada. David invited me to his office, he is the man who created Dallas, Knots Landing, and Family, among others. I didn’t even know he was doing Knots Landing. When I went to shoot the episode, David came down and said . . . .”when you called, I was casting this episode and you were so right for it and I knew you would do it well, I’m just sorry it’s only one scene.” The scene was with Kevin Dobson and It went very well. Then, they started writing the character in and before I knew it, I had done 10 shows. Each time I finished an episode, I thought it might be my last. I’d get a script that said, ‘you know what I mean?’ and I didn’t know what they meant because they never told me if they were going to keep me or not. I never knew when or if I was coming back. Then they finally gave me a contract and I knew I was in for the duration. My chance meeting with David Jacobs was a stroke of luck that turned into a contract. No matter how good you are you need someone, somewhere, to say “I’m going to give you a chance,” and David was that person for me.

Now that I’ve settled in at Knots, I can stop and smell the roses, so to speak. I work with some pretty wonderful people. Kevin Dobson is very funny, Doug Sheehan has a sarcastic sort of sense of humor I enjoy, while I wouldn’t say Hunt Block has a rollicking sense of humor, he’s a little more quiet than the other guys. Ted Shackelford has a dry sense of humor . . . we laugh a lot at work. This season I stared doing more with Donna Mills. She’s such a perceptional actress, she really has got it down. We usually do a parody of the show during camera bickering with Abby and Jill saying horrible things to each other we’d never be allowed to say on camera. I would love to have the chance to work with everyone on the show, especially Joan Van Ark.

I feel really lucky that out of all the night time soaps, I wound up on ‘Knots Landing’. Sure we have out elements of glamour . . . . Donna is very glamorous, but by and large, we are a regular show people can identify with. It doesn’t lend itself to ego problems because out show is about normal people and most of us are very normal, not affected. It appears the cast was picked with a strong family element in mind.

I know I’ve been talking about Knots Landing a lot, but it is a big part of my life right now. when I get away and I try and getaway almost every weekend, I go to Santa Barbara, a spa in the desert or to Lake Arrowhead. if I have a long weekend off I go to San Francisco. I love to cook and have friends over for dinner, that’s why when I’ll cook all day Saturday and have the party that night. I recently had a party in Arrowhead where everyone played a character in a murder mystery . . . . . . .kind of like a real-life board game. Afterward, my friends stayed over, we all went for long walks, sat by the fire and had breakfast together in the morning . . . . .I really love doing that. If I’m on my own, I like to go horseback riding or practice jumping horses. I find that very relaxing because the English riding takes a lot of concentration. It forces you to take your mind off other things because you have to pay close attention to the horse and what you’re doing.

I’ll always be grateful to David Jacobs for giving my the chance to play Jill on Knots Landing, I couldn’t think of a better show or character to have. I also want to thank our fans and let them know I love to hear from them.