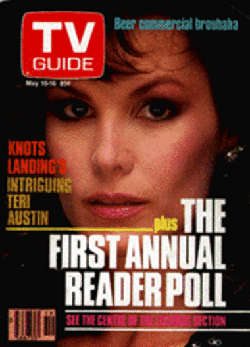 Teri Austin’s bright brown eyes momentarily glaze over. Suddenly , they light up. “Well, it’s sort of like Mississauga without the culture and charm.” The engaging young actress laughs playfully at the expense of the sprawling suburb just west of her native Toronto. But she will admit to one advantage that Los Angeles enjoys: “it’s the only place in the world where you can rent tropical fish.”

While it would appear that Teri Austin has not lost her heart to Hollywood, Hollywood has become rather smitten with Teri. “I see a terribly charming, endearing person there,” enthuses Ted Shackelford, who plays opposite her as Gary Ewing on the popular prime-time soap Knots Landing. Producer David Jacobs saw those same qualities, and in just over a year of living in L.A., Austin has firmly established herself on the series as Jill Bennett, an intelligent and seductive young career woman. “It’s a bit of a stretch for me,” teases Austin, who can still be seen weekly on CTV’s Thrill of a Lifetime. She taped all those episodes last summer, and they’re still running.

A more difficult stretch was leaving her home (Austin sold her two Toronto houses), family, friends and career in Canada. “I didn’t come south because I was dying to move to the states,” says Austin, “but if you’re not doing one of the three shows that tare shot in town, you only work a couple of times a year in Canadian television. You don’t go from job to job to job.” Type-casting was also a problem. “In Toronto, I was always cast as a kind of ‘lip gloss kid.’ I started thinking that maybe casting people were only seeing me in that one light.” In fact, her Canadian credits are most extensive than she lets on. Since graduating from the theatre program at Toronto’s York University, Austin has worked steadily in theatre, radio, films (“Critical List” and “Loose Ends”) and television.

Eventually, Austin stumbled upon the irony that she was missing out on better Canadian roles because she did not live in the United States. “I went to an audition for a minor role, and the people said, ‘You know, you’re really a leading-person type, and we wish we had met you in L.A. because we would have cast you there’.” After talking with a Toronto casting agent about all the Canadians who had gone south, Austin thought, “I’ve got to make the move. I love Toronto, but after missing another good role in a local casting office . . .” So she walked across the street, bought a plane ticket to Hollywood and didn’t look back. And though she’s happy–and working — Austin does miss the congeniality of Toronto. “I invite people over for dinner, and they’re shocked. you don’t invite someone into your home, and if you do, it’s because you have some lavish place you want to lord over them.”

Austin quickly discovered that her Canadian work experience did nothing for her U.S. credit rating. When she tried to open an account, the banks had never heard of the Canadian film and television studios that she had worked for, “so it was like I came from Guam!” On the other hand, they Hollywood talent agencies that friends had recommended were quite impressed with her work. In no time, she was signed and “Testing for everything.” One of her first efforts was in a losing pilot for ABC called Champions that she did with fellow countryman Duncan Regehr. “It was one of those comedy/adventures that is just my favorite genre,” states Austin, tongue firmly in cheek. “I guess that’s where you’re supposed to laugh when you’re getting stabbed.”

Soon after, while trying out for the short-lived Lorimar series Berrengers, Austin decided to renew acquaintances with producer David Jacobs. Her timing could not have been better. “Teri was in a soap I produced in Canada [Loving Friends and Perfect Couples],” Jacobs recalls. “She was only supposed to be in one or two shows, but I extended her part because I thought she was just adorable. She had a kind of vulnerability and sweetness that I thought was terrific on Film.” Jacobs just happened to be looking for a young actress to play a small part on Knots Landing. “And I thought she’d be perfect for this,” he says.

Once again, Austin turned a bit part into a regular series role. “The people who influence you, like wives and friends, said, ‘I like her, she’s cute’,” reveals Jacobs. “And that’s enough on television to make you think you better use more of her.” Austin also passed muster with another of Jacobs’ most trusted advisers: a waitress at a local deli on Ventura Boulevard. “She tells me every week what I should watch for,” says Jacobs, who puts far more stock in in unsolicited audience reaction than any “absurd network research. That’s why I think that Teri is going to have a pretty good future. First, because she is improving all the time; and second, because although she’s very beautiful, women like her and that’s a big thing.”

Austin’s age also worked in her favor. Jacobs was looking for a younger woman as a regular, “somebody under 30,” to balance out the cast. Austin as Jill Bennett became the solution, and her part was given more substance.

Was this Austin’s thrill of a lifetime? “Gawd!” she says, laughing. “Actually, it is my big break. And it’s a blast being on the show. The stories are fun–so far I’m having an affair with one man and flirting with another. But there’s not a lot of those heavy, bizarre plots found on some of the other shows, where they say, ‘My Gawd! you were raped by your brother’s uncle who then went to Moldavia!’ I mean, I can’t follow them. But Knots is fun to do because the writers are very responsive. I had a scene with Ted where Jill and Gary are together, and they way the dialogue was written, there was something wrong that she was trying to find out. And I said, ‘Listen, these people have been to bed four or five times. you don’t have to ask if you know something’s wrong.’ And they replied, ‘Yeah, just do what you like.’ And I think it turned out more tender and a bit more realistic.”

At first, Austin was somewhat intimidated working with veteran Hollywood actresses such as Julie Harris and, last season, Ava Gardner. her very first scene was with Gardner. Even the Knots Landing soundstage caused butterflies: They shoot on the same MGM stage where “The Wizard of OZ” was shot. However, the rest of the cast quickly made her feel at home. “you hear stories of other sets, where they bring on somebody, maybe a big name, and they get more money and everybody hates their guts. On our show, it’s not like that. Lisa Hartman is from Texas, very down home, very nice. Joan Van Ark goes out of her way to say, ‘I was watching the dailies the other day, and your scene was great.’ And Michele [Lee] is the same way. The guys, of course, are great,” grins Austin. “I’m the new girl on the block!”

The only people who do give her a hard time are the crew. “Lately, I’ve been doing all these bedroom scenes,” says Austin with a blush. “The crew will go, ‘Oh no, not again! Do we have to watch her naked again?’ ”

The crew also makes fun of her accent, which only goes to prove that you can take the girl out of Toronto, but you can’t take the “ooot” out of the girl. “We say ‘ooot and aboot’,” explains Austin. “They say ‘awt and abawt.’ The producers want me to speak like they do in the U.S. Midwest. I’ll be in the middle of a scene and say, ‘Matt, get ooot of my office!’ And the crew will all go, ‘Ooot! Ooot! Ooot!’ ” Shackelford insists that he doesn’t even hear the accent, and just shakes his head when a scene has to be repeated because of it. “I mean, who cares? If anything, it sounds a little Scottish, which I think is wonderful.” Now that she is aware of it, Austin can detect a Scottish lilt when she hears from her parents, native Torontonians. “When I went home at Christmas, I said to my family, ‘All right, knock it off. Quit talkin’ funny’.”

Accent aside, one thing Austin definitely plans to hold on to is her Canadian identity. “I’m setting up the Canadian Identity Bus Tour in Hollywood,” claims Austin. “It’s for Canadians here who are complacently Canadian, or not proud to be Canadian, or unsure of their identity. It will start off in Hollywood and end in Las Vegas. And then, I assure you, they will know where they stand.”

One thing is for sure: If the tour doesn’t make them feel proud of their country, Teri Austin certainly will.