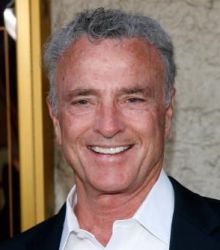 Kevin attributes his ambition, drive and determination to succeed, to the way he was brought up . . . . and later to the help of his wife Susan, who encouraged him all along the way.

“When I really started working with the ‘Kojak’ series, I said, ‘That’s it. I’ve succeeded.’ Then I found that the same dream I had in the beginning when I decided to be in this business, the dream never ends. The dream is always going forward, moving forward.”

Kevin thought for a moment and went on to explain, “I’ve been fortunate in that when ‘Kojak’ ended, the dream happened again. And now I’ve done nine Movies of the Week that I’ve had the lead in and the movies are another career.” Kevin says he loves his successful television career and someday hopes to be able to do more theater. So far his work schedules have prevented his fitting that in. It’s still in the future. But for now, Kevin says, “I’m proud of where I am today and proud of what the future will hold in my profession.”

Meantime, Kevin happily reports that he has directed his first ‘Knots Landing’ episode.

“It was everything I thought It would be and more. I was in total control. I felt like I wanted to do all the parts and yet you find out, you make a suggestion here and there and you see that come to fruition, you see that come alive. It’s so rewarding. I had a great time with the younger people who are still finding a way, I really had a good time in making some adjustments and was tested as far as my creative input. on the technical side, I didn’t walk in there pretending I knew the camera, you know.”

Kevin has words of advice to other aspiring actors. “Commitment to a goal is not a sometimes thing. I work at my craft every day as hard as I can. I can’t say that I am in this business alone and I will succeed alone and will go into the future alone. It takes an absolute team. When you have a good team . . . .I credit my wife with that, the people around me like Joe Sutton, the right representation in agents, choosing the right material, being in the right place at the right time . . . . and most of all, being patient.

“At first, I wanted all the leads and after realizing what the inside of the business is about and how I can build to get those leads, you have to have patience, so I credit dedication with tenacity as purpose will be rewarded. I firmly believe that it’s a constant work effort, work ethic, belief in yourself and your abilities and not being afraid to take the next step forward.”

After nine years of ‘Knots Landing,’ Kevin has definite ideas as to why it is still successful where other nighttime soaps are fading.

“I think it’s the combination of people that is bringing this across. It is their realistic approach to what they’re doing. I think we can identify with each of these characters because they’re more grass roots people – not one of affluence. Everyone has fought for what they have achieved and I think that’s what we identify with. It’s not just Mack and what re represents, as the husband and great family man. The all-American guy. That takes a lot of work to make sure that comes across, but I think the success of the show is that the characters are real fighters for what they believe in. Nothing’s handed to any one of them. We identify with that struggle.”

Are there any similarities in Kevin and Mack? Differences?

“Mack is less frustrated that Kevin,” he said smiling. “Mack is less anxious. lately I’ve been trying to incorporate where they have that meeting and they share in equal anxiety and frustrations and next year Kevin and Mack are getting together in a greater form and wanting to expose more of that, those daily anxieties that Kevin suffers through, that I want Mack also to have, so I want to incorporate both.”

Is Kevin learning from Mack to be less anxious?

“It’s a good way to, yes, I am in a way. Yes, Kevin is learning from Mack because, I mean, that’s a sage place to do that and to express yourself, to express myself using someone else’s words. What a great way to do it, so Kevin is bringing more of his personal life to Mack in the guise of Mack and That’ll come out next season.”

Like most of the soaps, Knots Lading has its share of sex scenes and one wonders how Susan Dobson feels about that, does Kevin talk it over with her before his scenes the next day?

“I talk it over with Susan, but most of the time it’s after the fact. ‘God it was tough today,’ you know, a torrid sex scene. Fortunately the guy I play being married, and is probably the most married guy in Hollywood, I think those torrid sex scenes, if you have any ideas, I’d welcome them. I think it’s like safe sex working there and playing husband and wife and we have liberties but we haven’t put on her nightgown yet or anything like that.”

According to Kevin there is a very friendly atmosphere on the set with all the cast members.

“I don’t talk to anyone,” Kevin says kidding. “We have a great working relationship. It’s a wonderful camaraderie, a unit of people that have belief in making the show the best that it can be. All these people independent of Knots Landing, can surely have their own series if they wanted it and have the wherewithall to control and be the lead in that responsibility and how we are, to have a group of people with equal responsibilities giving the best presentation of themselves they can and when you put that combination together, they interact, sparks fly. I love working with those people. I think they’re just terrific. They keep bringing more out. you never know what’s going to happen, it’s always new and exciting.”

Today, the handsome actor from Queens, in New York City, who had just forty-six cents in his pocket when he got his part in ‘Kojak’ looks back with fondness at the long, hard struggle he went through, with Susan, to get to this point. They have three wonderful children, actually Kevin was one of a family of seven children himself. Susan and Kevin have two boys and a girl that they are raising to have the same values they have.

Kevin tries to involve his children when he works for charity groups he appears for, like Muscular Dystrophy and AIDS. Kevin got interested in the Retinitis Pigmentosa Foundation, which is a degenerative eye disease.

“I have two nephews who are legally blind and it’s always frustrated me that they can’t see, there’s got to be something done about this. So I’m putting my efforts in helping that Foundation because I know that it can help my Godson and help others.

“I try to expose my children to the various charities I’m associated with, to show then that things aren’t as bright all the time, that there are other people in the world that are not as fortunate as we are.”

Kevin feels that working for various causes is part of the responsibility of being a successful actor and a person the public recognizes.

“I’ve lost two friends to AIDS,” he says, “so if I can lend my support in helping out then I will do that. I’m also involved with the Special Olympics, which covers a wide variety of diseases.”

Helping out wherever he can is an opportunity to be able to give back some of what Kevin has gotten. It’s a responsibility that he takes very seriously, just as he takes his acting career and his family and friends. You won’t find a nicer guy than Kevin Dobson!