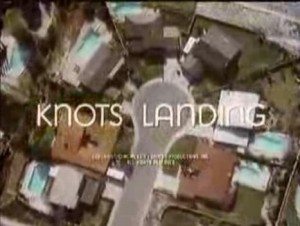 Prime-time soaps traffic in cliffhangers, but Knots Landing has lately weathered some doozies of its own.

Always CBS’ most reliable Thursday night performer, Knots slipped dramatically in its 13th season, as an inexperienced staff fumbled ill-advised story lines with miscast new characters. It got so bad production stopped in November so a new writing team could fix the last seven episodes.

“We’ve refocused the show and created real Knots Landing stories,” says creator David Jacobs. Tonight’s episode at 10 EST/PST, marking the new regime’s debut, is the first in six years he put through his word processor. “Whether it’s enough to get the audience back remains to be seen.”

Also surprisingly unclear is how talks between CBS and Knots studio Lorimar will turn out regarding a 14th year. With its larger cast, Knots is costly, and Jacobs thinks the network may reduce the fee it pays Lorimar to produce the show.

“We have some formulas on how to do it, but we can’t try to apply them unless we know we’ll be back. you can’t ask the cast for accommodations if it’s just iffy,” Jacobs says.

That’s one bottom line. The other, which most concerns longtime fans, is the sassier, more concentrated suds being generated by the new stories.

“I’ve always felt that, even with the more melodramatic cliffhangers, the psychological ones with Sumner are the important ones. Everything we’re doing now really is brought to bear on Sumner,” Jacobs says.

The charismatic mogul played by William Devane has just started a wry affair with Anne (Michelle Phillips) while flirting with her daughter, his rehired protege Paige (Nicollette Sheridan)/ he’s the target of a revenge campaign by Paige’s ex (Bruce Greenwood). And this week, demure Val (Joan Van Ark) is hired to write a tell-all bio of Sumner.

“I can accept people having tired of the show . . . but our fans weren’t bored, they got angry because we went too far and got stupid,” Jacobs says. “That’s why I desperately want another season. I don’t want it to end because it got terrible.”