Behind the Scenes of Back to the Cul-de-sac 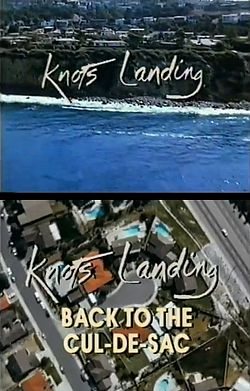 May 6, 1997—When Knots Landing went off the air on May 13, 1993, it was the longest- running primetime drama series in TV history after Gunsmoke. Every Thursday night at 10 p.m. ET, millions of viewers switched on the TV and visited the Southern California cul-de-sac where Val, Gary, Karen, Mack and the Knots gang lived. And to this day, there are legions of devoted Knots fans who miss the show, which was perhaps the most believable and cleverly plotted primetime soap to ever grace the airwaves.

Even series star Michele Lee gets emotional when she talks about what it was like when Knots went off the air. “I had a very difficult time,” says the actress who played Karen. “Leaving that show was leaving a group of people that I really enjoyed being with. We went through so many things as a group through that course of time, as you would with a family, whether it be new marriages, divorces, deaths.”

With all that is involved in coordinating a reunion, it’s a wonder that this project ever got off the ground. Jacobs and Filerman began calling the actors to see who would be interested—and available—to do the film well over a year ago. Then, a script was completed, but it had to be tweaked again and again to please everyone involved. Once everyone okayed the plot, it was time to coordinate the shooting schedule, which was difficult because of the actors’s conflicting schedules. Dobson, for one, was only available on weekends because he spent weekdays shooting his syndicated show, FX: The Series, in Toronto.

Lee says that once everyone finally did get on the set together (much of the film was shot at the Simi Valley, CA neighborhood where the original series was done) everything clicked. It was almost like they had never left. “Don’t forget we last did Knots Landing three and a half years ago, so it wasn’t like a 10-year hiatus. Also, we have all talked about it. I think we were all very, very surprised about how emotional it was for us to get back together again because we genuinely liked each other,” says Lee, who recalls the first day she worked on the reunion film with onscreen best buddy Van Ark. “It was very easy to look across the room and see Valene…there was a wonderful unspoken thing that happened.”

Meanwhile, Van Ark was stunned to see how much the actors who played Val and Gary’s twins, Lloyd and Cousins, had grown. “That’s when I got fahrklempt. I did, totally fahrklempt. I go out to the cul-de-sac the first day, driving out there at 4:30 in the morning in the dark the way we did year after year, morning and morning, and I get out of the car to see these two little kids, now 12 and 14. Michelle and I looked at each other and welled up.”

A lot has changed over the past four years. The reunion finds all of the characters in a state of crisis: Mack and Karen’s marriage is in trouble because he is facing a mid-life crisis; Val is suspected of murder; Kate returns with her daughter and claims that Gary is the dad; and Abby makes a million-dollar deal with Greg because she needs money to pay back taxes. The film is full of all the intrigue, scandal and family feuds Knots was known for.

With all the interest fans still have in Knots, you have to wonder why the series went off the air when it did. The ratings were respectable, the actors loved doing the show and there were no backstage squabbles to speak off. “We didn’t have to end it when we ended it,” Jacobs admits. The show’s demise came down to simple economics. “What was happening, though, was there was a process of attrition that was occurring, and we were amputating characters every year because the show was getting more and more expensive to produce…and I think we all felt rather than continue to amputate limbs, which is really what we were doing, that it was just time to stop.”

“I was just hitting my stride,” adds Lee, who is happy to be known for her work on Knots. “Knots Landing really opened up a lot of doors for all of us.”