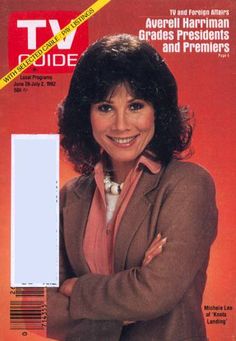 That day, on MGM’s Sounds Stage 25, where much of Knots Landing is filmed, Michele Lee was throwing her weight around. The show was going on location the following week in Altadena, Cal., about an hour and a half away, and Lee rightly wanted a car and driver to take her there and back in the early-morning and late-evening hours. The show’s production company, Lorimar, is not one that is easily pressed into spending additional money. As Michele Lee noisily pursued her objective with various production people, she met with helpless, noncommittal stares.

Finally, Lee blocked the path of an assistant production manager with her wiry, 5-foot-8-inch dancer’s body. In high heels, she towered over the young man and twisted her usually cheery visage into a satanic scowl. “Listen, Joe,” she warned him, “either I get that car and driver next week or you’re going to have a very unhappy star on your hands.” Joe slunk away to order the car and driver. Michele Lee has this kind of clout in a show with a giant cast because if anybody is the star, it is she. This was not true only a few weeks before last season’s filming began. It was then that she became the unknowing beneficiary of a daytime-soap-opera phenomenon that apparently has seeped into night-time soap opera. It seems that if you ask your agent to “renegotiate” your contract (that is, request more money), you run the risk of having your character suffer a rather sudden death.

That’s exactly what happened to Don Murray; he played Lee’s husband, Sid Fairgate, for the first two years of the series and then went over a cliff in a tampered-with car. The accident was not originally intended to be fatal. All of last season’s scripts were planned with the idea that Fairgate would survive the crash. But somewhere in the renegotiation-of-contract process, Sid Fairgate’s injuries became more serious. He died in the second episode -and Don Murray left the show “to pursue his own career objectives,” as it was announced to the press. Lee, playing Karen Fairgate, knew nothing of it until August, when she attended a dinner for CBS honcho Bud Grant. After the dinner, David Jacobs, creator/executive producer of Knots Landing, came over to Lee and said, “Let’s sit down for a minute and talk.” Jacobs told her about the impending departure of Sid Fairgate/Don Murray. “I know how much you like Don, he said, “but this is good for you. It opens up your part. You will be the main focus of the show while Karen Fairgate overcomes her greif, deals with her children, gets involved with other men, and so on.”

Because she admired Murray as an actor, Lee was shocked. But she recovered quickly. “OK,” she said, “now I want to renegotiate my contract-and get a bigger dressing room.”

Both she and Jacobs recall that she said this with “a twinkle in her eye.” Muses Lee, “Without the twinkle, Karen Fairgate would have been walking on the beach under the cliff, and Sid Fairgate’s car would have come crashing down on top of her.”

And so, by this hazardous route, Michele Lee became the central figure in Knots Landing, much as the principal plot lines in sister-show Dallas (also created by Jacobs) have come to revolve around Larry Hagman. Unlike Hagman’s manipulative J.R., however, Lee’s Karen Fairgate dominates with guile, intelligence and a shrewd understanding of the lascivious pursuits and nefarious machinations of her neighbors. Also, according to both the actress and Jacobs, there is a lot of Michele Lee in Karen Fairgate.

All this becomes apparent when you watch her at work at MGM. For example, Lee was called into a meeting with Jacobs and executive story editor Ann Marcus to help determine how Karen would realistically express her greif at the loss of Sid. “Well,” said Lee, “as you know, I’m in the midst of a personal loss myself. After 15 years of marriage, James Farentino and I split up. I think Karen would do the same things I did. I didn’t remove my wedding ring for three months, until I was ready to go in the world as a single person again. I must fill in for Jim with our 12-year-old son, David, helping him with his homework and going to school functions with him. I still don’t let anyone sit in Jim’s chair at the dinner table.” Jacobs and Marcus listened as Lee went on in this vein for about 20 minutes. Everything she said was incorporated into the scripts.

On the set, Lee is the undisputed queen bee. At 38, she has more stage and screen credits than anyone else (with the exception of Julie Harris), having begun her career as the singing-dancing-acting female lead in “How to Succeed in Business Without Really Trying”-both the Broadway and film versions-in 1962.

Lee’s physical presence also is impressive. She is taller than all the other women, and one of the men, in the cast, and she stands out as the only ethnic-looking-brown-eyed brunette in covey of Middle America-type blondes. She has the loudest voice, one that reverberates commandingly around the rafters of the ancient sound stage. Also, because her late father, Jack Dusick, was a makeup man at Metro-Goldwyn-Mayer for many years, she receives affection and constant kidding from the crew, many of whom worked with him.

Example: Propwoman Renita Lorden is setting a table for a scene in a Chinese restaurant in which Lee is to dine with Ted Shakelford, playing Gary Ewing. She says to Lee, “Last week, in that ice-cream-parlor scene, you ate up five three-scoop sundaes before the cameras even rolled. With that appetite, how do you stay so skinny? Today, I’m not putting out the Chinese food until the rehearsals are over. Else, I’ll have to drive a couple of miles to get more.”

With other members of the cast, Michele Lee is combination sorority sister, den mother and good ol’ girl.

Example: Joan Van Ark comes over to her on the set with a poster she has made. In the lower-left corner there is a photo of Lee, taken from a publicity shot, in which Karen Fairgate’s face is contorted with grief over the death of Sid Fairgate. In the upper-right-hand corner, there is a photo of a ferocious-looking James Farentino aiming a huge pistol at the Karen Fairgate head. Van Ark has hand-lettered a caption reading, “It’s so refreshing these days to see a couple who can take their seperation in stride.”

Example: Lee and Shakelford chide one another about how profane their speech patterns have become over the summer. They try to top one another with pruient talk. Shakelford has the last word when Lee says she has to go to her dressing room to change clothes. He says, “I’d like to watch. I need a little comedy after what we’ve been filming on the set.”

Example: In one scene, Shakelford inadvertently holds up a sheaf of papers, casting an obscuring shadow on Lee’s face. She barks, “Don’t you ever, ever do that to a star.” Everyone laughs, but no one can be certain that she didn’t mean it.

The daily Michele Lee Show thus goes on within the context of the making of Knots Landing. Watching both shows proceed at the same time, Julie Harris marvels that such an expert actress could have emerged from the impish song-dance-comedy performer that Michele Lee was-and still is. “The transition,” says Michele, “wasn’t easy.”

In explaining it to Donna Mills one day on the set, Lee recalled the ups and downs that finally led her to what amounts to a third period of stardom. “When I graduated from Alexander Hamilton High School in 1960,” she said, “I got lucky by trying out for a local revue, ‘Vintage ’60,’ which David Merrick saw and brought to Broadway. After that I went right into a show called ‘Bravo Giovanni’ and then into ‘How to Succeed in Business Without Really Trying.’ When I married Jim Farentino and our son David was born, I had to stay closer home and I guess I got myself another kind of stardom-of sorts–singing and dancing as a guest on TV variety shows. When variety shows became scarce, I sat myself down and said, ‘You’re not working very often, Michele, so you’d better swith gears and learn how to be a dramatic actress.’ Besides, with all that dancing, my knees were giving out. So I started by doing a couple of Love Boats, and I worked myself up to serious stuff in TV-movies.”

Jacobs fills in the rest of the story. He says, “When we were preparing Knots Landing as a spinoff from Dallas, my co-executive producer Michael Filerman came to me and said he’d just met Michele Lee at a party and that she is Karen Fairgate in the flesh. Two weeks earlier, I would have laughed Michael out of our office, but I had just seen Michele in ‘Bud and Lou,’ doing a remarkable straight acting job as Lou Costello’s long-suffering wife. She was so different from the singing and dancing Michele that I could hardly believe it. We called her in and made a deal that we’ve never regretted.”

Recently, Michele Lee was reflecting on these events in her little dressing room (all members of the cast of Knots Landing have little dressing rooms without toilets or running water). The editing rooms of MGM are just a few feet away. They were splicing together a Knots Landing episode and suddenly Lee’s voice came blaring in. “Hey that’s me,” she yelled and went running out into the street, imploring the editing personnel to repeat the sound track. They obliged. Anything for Jack Dusick’s daughter.

She came back, glowing. But her mood changed as her eye fell on a photo of Don Murray, whom she still reveres, and then on the poster just presented to her by Joan Van Ark. She stared at the paste-up of James Farentino aiming that enormous gun at her head.

She was silent for a moment. Then she furiously brushed her glistening dark hair and said, “Ah, well, it’s time for the star to go to work.”