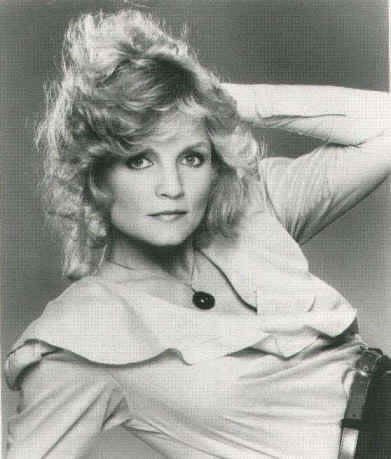 Sweet, Bitter, Friendly, Survivor, Victim, Heroine. These are just some adjectives to describe the personality of Laura Murphy Avery Sumner. Laura started off as an abused housewife and by the time of her death she was married to the richest guy in town. We’ll see how..

Laura was adopted as a baby by Hank Murphy and his wife. She was the youngest of a very crowded household. She lived in Pittsburg. By age 12, tragedy struck – Laura’s adoptive mother passed away,her old brothers and sisters were already married and Laura became the mistress of the house. She cooked, cleaned and did her father’s laundry. Laura enjoyed doing these because she was the kind of person who wanted to feel needed by others. Laura eventually graduated High School and did some post-High School studies. She became involved with Chip Todson- a PR. She then met Law student Richard Avery. Laura was very much attracted to Richard, because Richard gave her the attention she was always seeking. The two were later married, and Laura had to quit school and work hard to support Richard through Law School. Once again, it was okay with Laura because Richard needed her help. Richard graduated from Law School and became a lawyer. Later, Laura bore him a son, Jason Avery and the family moved to a cul-de-sac in a small southern California town known as Knots Landing.

Richard and Laura’s marriage began to deteriorate. Richard did not need Laura any more, he was a lawyer making the big bucks and to him Laura was just another housewife. Richard occasionally cheated on Laura and as time went by his treatment towards his wife kept getting worse. The lack of attention, she was receiving from Richard caused Laura to go out and meet other guys which later caused her to be raped. Laura wanted to work but Richard would not allow her to do so. Nevertheless, after being bailed by Laura’s father, Richard had no choice to let Laura work.

Laura passed her Real-Estate Certification and began working as a Real-Estate Agent. Meanwhile, Richard lost his job which made things worse. Laura meanwhile began getting close to her boss Scooter Warren who treated her much better than Richard. Richard did not care; he was too busy being involved with schemy neighbour Abby Cunningham. Eventually, Laura and Richard worked their marital problems for a while. They became close again, when they dear friend Sidney Fairgate was killed in an automobile accident.

Laura’s real estate career kept rising while Richard’s law career kept falling. Problems began again in the Avery’s marriage. Laura thought that it would be best to leave Richard and divorce him. She was later shocked when she found out that she was pregnant with Richard’s baby. Laura, however, chose to leave him with Jason. This caused Richard to suffer a mental breakdown and later be institutionalized.

Richard was released from the mental institution and he and Laura began working their marital problems for zillions times. Laura later gave birth to a baby boy Daniel Avery. The new addition to the Avery’s Household gave hope to Richard and he later opened a Restaurant which he called “Daniel”. Things were finally working out for Laura and Richard, a new baby, a new business, life was getting better. However, when Laura found out that Richard and Abby were doing deals together, she realized that their marriage was over. Richard, too, realized that their marriage was over and chose to disappear.

After Richard’s disappearance, Laura became a single mother. Thanks to Gary, she was able to work as a Real-Estate consultant for his company Gary Ewing Enterprises. Laura had to work with Abby which was something she hated. Nevertheless, she managed to find out all of Abby’s dirty dealings and blackmailed Abby that she’ll keep her mouth shut in exchange for a piece of Abby’s newest development project known as Lotus Point. Later, Laura’s confidence in herself continue to get better, she managed to get the eyes of Senate Candidate Gregory Sumner who was at the time sleeping with Abby. They began a passionate affair.

Greg won the senate election and began working as a senator and asked Laura to join his team. Laura gladly accepted the offer. Later, Greg resigned the senate to take over his father’s empire-Galveston Industries. Things got worse in their relationship when Ruth, Greg’s mother, schemed with Abby to break the couple up. They succeeded, and Laura, after having been in one unsuccessful marriage chose to break up with Greg for good and move on with her life.

Eventually, Laura realized that Greg loved her and was no Richard, she needed him and he needed her. The couple were later married in a Las Vegas Chapel. Later, Laura became a little concerned with Greg’s relationship with his so-called long-lost half brother Peter Hollister. Laura never trusted the guy.

Laura’s marriage to Greg had its ups and down. However, it was threatened, when Laura announced to Greg that she was pregnant. Greg did not want to be a father and practically suggested that she has an abortion. Laura who was a fighter now, not a victim anymore, chose to keep the baby, with or without Greg’s approval. Greg finally gave in and the couple welcomed their beautiful daughter, Margaret Sumner.

Things kept looking good for the Sumner couple, until Laura was diagnosed with an incurable brain tumour. Laura chose to die alone in a clinic rather than have Greg at her side, this upset Greg a bit. In the fall of 1987, Laura passed away. After her death, she left a videotape for her friends.

Laura will always be remembered by her friends in Knots Landing, her legacy continues to live through her children especially daughter Meg.