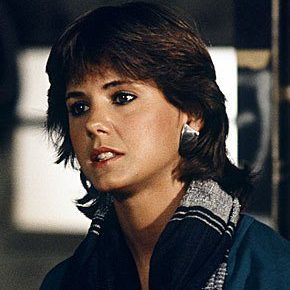 Paula Vertosick was a pretty forest ranger who worked for a California state park in the mountains. As part of her job, she did wildlife slide shows at a local mountain resort and lead nature hikes. One day Mac McKenzie came to her lecture. He was the only one who showed up, so she gave him a personal lecture and hike. Afterwards they went for drinks and talked about their personal lives. Over the few days Mac was on vacation there, they became very close and were attracted to one another. Paula invited Mac to come to her cabin, but he couldn’t cheat on his wife.

A few months later, Paula became friendly with a group of young people on vacation. One guy, Michael Fairgate, was depressed over his bad luck with women, and Paula gave him some advice. While talking, she told him that she had just taken a job as a lecturer at the University he attended, and Michael told her to look him up when he got to Knots Landing. She did, and she and Michael became friends. When Michael’s mother Karen needed to know some environmental data for the board she sat on, Michael put them in touch with each other. Karen and Paula became fast friends. They shared a love of protecting the environment and soon worked together on many projects. Karen had Paula over for dinner, wanting her to meet the now-single Gary Ewing, and Paula was shocked to find that Mac was Karen’s husband.

Paula and Mac continued to be very attracted to one another. Mac had several fantasies about her. Paula admitted to Michael that she was in love with a married man, but didn’t tell him it was Mac. Karen invited Paula to stay with them for a few days when work was being done on her apartment. Paula and Mac were uncomfortable being in such close proximity to one another, since their mutual attraction was so strong.

Paula continued to help Karen with her environmental boards. The meetings were held in a conference room at the Sumner Group. One day Paula met Greg, and they began trading barbs. Underneath, there was an attraction. Greg and Paula began to date. She felt that underneath Greg’s blustery and over-confidant demeaner there was the heart of a sensitive little boy, and Paula was determined to get to that part of Greg. Paula soon became a bit frusterated with Greg. She felt that Greg called her whenever he wanted a diversion, and she wanted a more serious relationship. She also felt that Greg took her for granted, and she wanted him to prove to her that he cared about her. Karen asked her why on earth she was dating Greg, and Paula admitted she loved him.

When Greg was shot and poisoned by Mary Francis’s boyfriend, Paula kept vigil at the hospital. She never left Greg’s side. When Greg was recovering from his liver transplant, and still unresponsive, Paula stayed with him, talking to him, begging him to come out of it and respond. Then Anne, who had returned to Knots Landing, walked into his room. Greg said “Anne!” and Paula was crushed.

When Greg returned home, Paula was determined that he would follow his doctors health guidelines, and change his life. Paula took care of him, and wouldn’t allow him to drink or eat foods that were bad for him. Then Anne would show up with Champagne, and drink with him. Paula would be mad, and remind him he was not supposed to drink. Greg would refer to her as “mom” and say he didn’t need her taking care of him. When Anne was around, Greg pretty much ignored Paula. Paula decided to fight fire with fire, and showed up at Greg’s wearing a sexy dress and bought him a bottle of vodka. Greg was amused at this new side of Paula. Paula finally had it with Greg. She was offered a job in another state, and decided to accept it. Paula ran into Greg while leaving her last environmental meeting. He asked her why she hadn’t told him she was going to leave. Paula was very angry, and started yelling at Greg in front of all the employees about how selfish he was, and how he didn’t take things seriously. She yelled that she was the best thing that ever happened to him, and if he couldn’t appreciate her, then it was his loss. Paula moved away, and is still a forest ranger today.