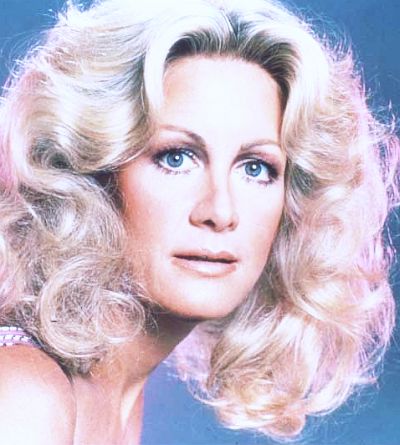 Valene Clements was the daughter of Lillimae and Jeremiah Clements. When Valene was 5, Lillimae left Valene with her father to pursue her music career. When Val’s father died, she went to live with her elderly Grandmother and when her grandmother died she lived with first one Aunt and then another.

As a teenager Val worked in a diner, it was there she met Gary Ewing. After a whirlwind courtship they married. Valene hadn’t just married Gary, she also married all of the rich Ewing’s of Dallas. For a while things seemed to go well and they had a daughter, Lucy. But, Gary’s brother J.R’ harassed the couple which started rows between the pair, soon Gary was drinking too much. After several months of arguing, Valene threw Gary out and he simply just didn’t come back. J.R. threatened Val, so she decided to take baby Lucy and go to her mother. She arrived at Lillimae’s home and was astounded when Lillimae turned her away, J.R. soon caught up with her and took Lucy away, he and his gang of mates threatened that they would have her arrested for prostitution if she ever set foot in Dallas again. Broken hearted Valene had to start another new chapter of her life. Her one consolation was that she knew Lucy would be well cared for by Miss Ellie (Gary’s Momma).

For the next 15 years Valene worked in a series of diners. One day whilst working in a little Diner just out side Dallas, Valene looked up and their stood Lucy, it was a tearful and truthful reunion. Several weeks later Lucy came to visit again but this time she wasn’t alone, she had brought Gary with her. Gary and Lucy persuaded Valene to go back to Southfork. J.R. had set Gary up in an office equipment machinery firm in a hope that Gary would fail as usual and leave Southfork. Gary knew that living on Southfork again would soon drive him back to drink, so he left again. Valene saw him leaving and accused him of running away, J.R. then offered Valene $5000.00 to leave as well. Val told J.R. that the one thing he couldn’t do was buy her with his Ewing money and left in search of Gary. Leaving Lucy behind. … again.

Valene sent Lucy a letter explaining that she had been driven off Southfork by J.R., Val kept trying to get in contact with Lucy even asking for Bobby’s help. It didn’t work; Lucy didn’t want to know. Bobby, Gary’s younger brother persuaded Lucy to give Val one more chance and they went to her motel room just in time to her J.R. threatening Val and laughing at her stupidity for not accepting the money he had offered her before. Lucy now new the truth and a friendship started between Val and Lucy. Val and Gary found each other again and decided to try and rebuild their relationship. They still loved each other. After bumping into Bobby, Gary arranged to meet with his mother who wanted them to come back to Southfork. Gary explained that they wanted a fresh start in a new area, so Miss Ellie decided that she would buy them a house, in a place called Knots Landing, California.

Val and Gary arrived in California, Miss Ellie as well as buying them a home had sent them loads of furniture from Southfork. Val was entranced with California especially with the ocean, she had never seen the ocean. She liked her new neighbours Sid and Karen were middle aged and had kids, Ginger and Kenny were newly weds and Richard and Laura had a rather unsettled marriage and a young son. Sid offered Gary a job at his garage. Lillimae came to visit and Val started a row with Lilimae. Lillimae apologised for not taking Valene and Lucy in, when Lucy was a baby. Valene haltingly reconciled with Lillimae. Gary and Val receive a phone from Bobby to tell them that Lucy has found out about the remarriage and is angry. Lucy comes out to stay with Val and Gary and winds Val around her little finger whilst causing havoc for Gary. Lucy asks Val to move back to Texas with her saying that she blamed Gary for everything, Val thought about it, but then Lucy and Gary made up and they all went for a run on the beach! Sid and Karen threw a party for Gary and offer him a promotion, he then started drinking to celebrate. Gary took off for the bar and is arrested by the police. Val contemplated leaving Gary but Karen talks her out of it and names her ‘The Little Engine that could.’ Gary joins Alcoholics Anonymous. Sid’s sister Abby arrives in Knots Landing with her two children Olivia and Brian, Sid offers Abby a job at his Garage. Val decides to go to college. Gary is attending Al anon and meets a man who needs his help, Val gets a little jealous of Gary helping Earl Trent all the time. Gary gets close to Judy Trent, Earl’s wife. To make trouble Abby invites Val for lunch and takes her to the restaurant where Judy and Gary are eating. Val gets angry and runs off, Judy tells Val that she and Gary are in love. Val went to the beach to collect her thoughts. Gary finds her and they make up.

Val sees Lillimae stop a mugging on the news and realises that Lillimae is homeless, Val asks Lillimae to live with her and Gary. Gary and Abby start to see a lot of each other supposedly about business but it is really the start of an affair. Val writes a book at college. Lillimae and Joe Cooper (Karen’s brother) send the book to a publisher, who is impressed and offers Val a deal. Gary reads the book and says that as it is all about the Ewings, she must turn the publishing deal down. Val says she will if Gary stops seeing Abby. Gary can’t keep his promise to Val. Val asks Gary if he is sleeping with Abby and he storms off, so Val asks Abby if they are sleeping together and Abby tells Val that she’s not saying Yes and not saying no, but she is saying that she can have him anytime she want him.’ Val slaps Abby around the face and signs the book deal anyway. Gary fails to turn up at the book release party so Karen goes looking for him, Val follows Karen and finds Gary in bed with Abby. Val kicks Gary out. Val’s book is renamed Capricorn crude and becomes a No.1 best seller.

Val meets Ben Gibson while out running they start a relationship, Gary is jealous, Val and Gary divorce. Gary and Val sleep together just before Gary marries Abby. Val finds out she is pregnant with Gary’s twins and Ben agrees to raise them as his own. Abby finds out that the twins aren’t Ben’s but Gary’s. Val goes into premature labour and is told that the baby’s have died. She is convinced that they are alive and worries everyone by going mad and disappearing to Tennessee. In Tennessee she tells everyone her name is Verna and starts dating Parker Winslow. Gary finds Val and is horrified when she doesn’t recognise him, he stops her marrying Parker and takes her back to Knots Landing. Lillimae, Ben and Valene’s newly found half brother Joshua upset her when they still don’t believe that her twins are alive. Karen believes her though and starts looking for them. The trail leads to a Dr Ackerman who was hired by one of Abby’s flunkies to sell the twins to another couple. Karen, Mack and Ben find the twins but before the can do any thing, Abby tells Val that she has found the twins. After quite a struggle Val and the twins are reunited.

Whilst Ben and Val happily get married, Abby and Gary are arguing and Val’s brother Joshua resorts to violence with his new bride Cathy. Joshua is jealous of Cathy and lures her to a rooftop, he has decided to kill them both, Lillimae screams to Joshua to stop, he takes a step back and falls of the roof. Cathy and Ben start to get closer. Gary has his suspicions that the twins are his and gives Bobby and Betsy a parcel of land each, as their first birthday present. Ben is angry and contemplates leaving Val for Cathy, he decides to stay and try again with Val. Ben is then offered a job with Greg Sumner and he says yes. Ben’s old college friend Jean Hackney gets in touch and threatens Ben, they had been terrorists whilst at college and he must either kill Greg Sumner or ‘they’ would kill Val, the twins and Ben. Ben goes along with it for a while, and then with the help of Mack and Greg, Jean Hackney is sent away for good. Ben is still scared that Jean will find him and decides to disappear forever. Lillimae meets Al and they fall in love and decide to go travelling in Al’s winnebago. Meanwhile Abby and Gary have divorced and Gary is seeing Jill Bennet.

Gary starts seeing a lot of Val and the twins, so Val tells him that he is the kid’s true father. Jill is jealous and starts to play with Val’s mind by, sending her letters from Ben. Jill then sets up an elaborate plan to kill Val, it fails and Val is taken to a psychiatric hospital. Val tells everyone that Jill tried to kill her. No one believes her and the children go to live with Lillimae. Gary and Mack start to believe Val and unravel Jill’s plan. Gary finishes his relationship with Jill who then kills herself in a failed attempt to woo Gary back. Aunt Ginny brings the children back from Lillimae’s and starts living with Val. Aunt Ginny persuades Val to buy a computer and in doing so, Val meets Danny Waleska, a short courtship ensues and Val and Danny marry. Danny dislikes Gary and frightens the twins into believing Gary doesn’t love them any more. Then Gary discovers Danny’s murky past and Danny starts to bully Val, Val realises that for everyone sanity she must leave Danny. Danny kills Pat whilst drunk driving, then he sneaks into an empty house on Seaview Circle and he slips into the outside pool and drowns.

Gary and Val decide that after all that has happened in their lives they still love each other. While they are living at Gary’s ranch Val suffers a fall and starts acting very strangely. Val finally recoves from her illness and marries Gary for the third time. Gary looses all of his money in the Tidal Energy Venture so Val takes up a request from her publisher to write a book on Greg Sumner. Whilst researching for the book Val is kidnapped by Tredwell and presumed dead. It takes a lot of courage and many months for Val to escape her kidnappers and make her way back to California. Val sends Gary a note asking him to meet her at the Ocean, as she has never seen the Ocean.

Gary is surprised to receive the note as he thought Val was dead and a very touching reunion is held.