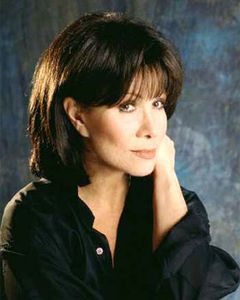 Karen originally came from New York and had a brother, Joe. She moved to Philadelphia to study, where she met and fell in love with Sid Fairgate, who lived with his wife, Susan Philby and their daughter, Annie.

When Sid divorced Susan, he married Karen and they moved to Knots Landing, California where lived with their children Diana, Eric and Michael.

Karen got on with everybody in the neighbourhood, except for her sister in law, Abby. She always saw through her conniving, manipulating ways, even when Sid didn’t! However, it was Valene, her next door neighbour, who was to be her closest and dearest friend.

When Sid died, Karen took over the running of Knots Landing Motors, and when Sid’s killers had been released, she went to Marion Patrick MacKenzie (Mack), who was the Federal Prosecutor, for help to try and bring them to justice. Her and Mack fell in love and they eloped in Las Vegas

Karen got hooked on prescription pills when her daughter, Diana, run off and married Chip Roberts/Tony Fenice. When Chip accidentally died, Diana went to live with her Aunt Abby and Gary at Westfork, thus increasing Karen’s dependency on pills. When Mack found her unconscious in the bathroom, she was admitted to hospital to recuperate.

Karen decided to divorce Mack when she discovered he was still tracking down the Wolfbridge Group – this was after she had been shot! Karen’s children frantically tried to get her to change her mind from divorcing Mack and she eventually forgave him, as she still loved him. She ended up having an operation to try and remove the bullet, which was lodged in a precarious position, thus preventing her from being paralysed.

She went to work at Lotus Point when Gary made her an equal partner to make up for Abby’s indiscretion with Sid’s uncle’s apartment.

When her best friend Valene was determined that her twin babies hadn’t been still born, it was Karen who was instrumental in tracking down the doctor and nurse who were in the delivery room during the birth. This eventually led to Valene being reunited with her babies when they were discovered living with their illegal adoptive parents.

An old friend of Mack’s, Phil Halbert, kidnapped Karen as he was seeking revenge when Mack testified against him years ago. However, she escaped and was soon reunited with Mack.

When her friend Laura died, she left behind her forlorn husband, Greg and their baby daughter, Meg. When Karen realised that Greg was grieving and having a tough time coping without Laura, Greg gave Meg to Karen and Mack to bring up as their own.

Whilst running Lotus Point with her fellow partners, Karen fought Manny Vasquez who tried to arrange a deal which involved drugs. Lotus Point then became a focus of bad news because of the drug bust and was later sold to a Japanese firm, which was actually headed by Abby.

Later on, she went to work on “Open Mike” which was a TV show and subsequently became a victim of harassment by the shows assistant producer, Jeff Cameron. Soon after starting work there, she received nasty packages which included an animals heart and a box of flowers which contained snakes….

Karen and Mack separated once again when they had to battle to keep Meg when Mary Robeson arrived claiming to be Meg’s grandmother. Karen took Meg and went to stay with Diana in New York, but reconciled with Mack when he went to visit them and they went back to their home in 16972 Seaview Circle, Knots Landing.